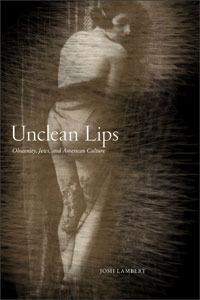 Jews have played an integral role in the history of obscenity in America. For most of the 20th century, Jewish entrepreneurs and editors led the charge against obscenity laws. Jewish lawyers battled literary censorship even when their non-Jewish counterparts refused to do so, and they won court decisions in favor of texts including Ulysses, A Howl, Lady Chatterley’s Lover, and Tropic of Cancer. Jewish literary critics have provided some of the most influential courtroom testimony on behalf of freedom of expression.

The anti-Semitic stereotype of the lascivious Jew has made many historians hesitant to draw a direct link between Jewishness and obscenity. In Unclean Lips, Josh Lambert addresses the Jewishness of participants in obscenity controversies in the U.S. directly, exploring the transformative roles played by a host of neglected figures in the development of modern and postmodern American culture.

The diversity of American Jewry means that there is no single explanation for Jews’ interventions in this field. Rejecting generalizations, this bookoffers case studies that pair cultural histories with close readings of both contested texts and trial transcripts to reveal the ways in which specific engagements with obscenity mattered to particular American Jews at discrete historical moments.

Reading American culture from Theodore Dreiser and Henry Miller to Curb Your Enthusiasm and FCC v. Fox, Unclean Lips analyzes the variable historical and cultural factors that account for the central role Jews have played in the struggles over obscenity and censorship in the modern United States.

Josh Lambert is Academic Director of the Yiddish Book Center and Visiting Assistant Professor of English at the University of Massachusetts, Amherst. In The Goldstein-Goren Series in American Jewish History

“Josh Lambert undermines many cliches about Jews, obscenity, and even ‘sexual anti-Semitism’ in this engrossing book. He brilliantly navigates us through many episodes of sexual representation, some familiar, some quite unexpected, along with the social and legal conflicts that surrounded them. Lucidly written and arduously researched, this is an exceptional work of cultural history.”
-Morris Dickstein, author of Dancing in the Dark: A Cultural History of the Great Depression

Guns of Outlaws: Weapons of the American Bad Man By: Gerry…