The Wall Street Trilogy: A History By: Antony C Sutton 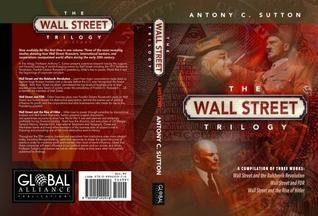 Now available for the first time in one volume: Three of the most revealing studies showing how Wall Street financiers, international bankers, and corporations manipulated world affairs during the early 20th century.

Wall Street and the Bolshevik Revolution – Learn how major corporations made deals to capture huge Russian markets over a decade before the U.S. even recognized the Soviet regime. And, how ‘closet socialism’ permeated the top levels of business only to later expand across many facets of society under the presidency of Franklin D. Roosevelt . . . all to benefit the interests of Wall Street.

Wall Street and FDR – Other histories gloss over Franklin Delano Roosevelt’s years on Wall Street, but Sutton reveals his destructive speculation, behind-the-scenes use of political influence for profit, and the corporations and elite businessmen who made his rise to the Presidency possible.

Wall Street and the Rise of Hitler – Hitler rose to power through subsidies by international bankers and Wall Street financiers. Sutton presents original documents and eyewitness accounts to show how World War II was well-planned and extremely profitable for top financial insiders. Read how the directors and executives of J.P. Morgan, General Electric, Standard Oil, International Telephone and Telegraph, Chase and Manhattan banks and many other members of the business elite all played a role in financing and promoting one of the most destructive wars in history.

Throughout the 20th century, bankers and executives from institutions even more relevant today, including Morgan banking, used their resources to shape the global structure of events in order to maximize profit and maintain their level of world influence. Given that these companies still exert influence in our political system and our society as a whole, Professor Sutton’s conclusions are just as relevant today as they were when he originally published his findings.

Guns of Outlaws: Weapons of the American Bad Man By: Gerry…