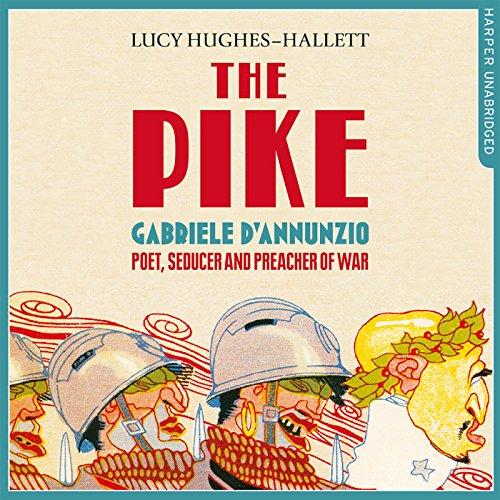 Winner of the 2013 Costa Book Awards, Biography of the Year.

Winner of the 2013 Samuel Johnson Prize for non-fiction.

The story of Gabriele D’Annunzio, poet, daredevil – and Fascist. In September 1919 Gabriele D’Annunzio, successful poet and occasional politician, declared himself Commandante of the city of Fiume in modern-day Croatia. His intention – to establish a utopia based on his fascist and artistic ideals. It was the dramatic pinnacle to an outrageous career.

Lucy Hughes-Hallett charts the controversial life of D’Annunzio, the debauched artist who became a national hero. His evolution from idealist Romantic to radical right-wing revolutionary is a political parable. Through his ideological journey, culminating in the failure of the Fiume endeavour, we witness the political turbulence of early 20th-century Europe and the emergence of fascism.

In The Pike, Hughes-Hallett addresses the cult of nationalism and the origins of political extremism – and at the centre of the book stands the charismatic D’Annunzio: A figure as deplorable as he is fascinating.

A Year in the Life of the Yorkshire Shepherdess By: Amanda…

Adventures of the Yorkshire Shepherdess By: Amanda Owen…

Girl Sleuth: Nancy Drew and the Women Who Created Her By:…

One Pair of Feet By: Monica Dickens [Audiobook]

Whip Smart: The True Story of a Secret Life By: Melissa…

The Chief: The Life of William Randolph Hearst By: David…

Jump: My Secret Journey from the Streets to the Boardroom…

Bitcoin Widow: Love, Betrayal and the Missing Millions By:…

This Will Be Funny Later: A Memoir By: Jenny Pentland…

A Year in the Life of the Yorkshire Shepherdess By: Amanda Owen…

How to Stop Worrying and Start Living By: Dale Carnegie