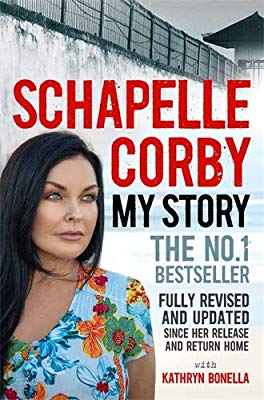 Schapelle Corby walked out of Kerobokan Prison in 2014, leaving behind a dark hellhole of violence, corruption, and squalor, and straight into a global media circus. She had been Hotel K’s most famous inmate.

Schapelle was a 27-year-old beauty-school student when, in 2004, Bali customs officers found 4.2 kilograms of marijuana in her boogie-board bag. She was convicted of a crime she still vehemently denies committing.

She spent ten years in Hotel K, where she survived unimaginable horrors, corrupt guards, degrading conditions, and abuse at the hands of other prisoners, but also, amazingly, found the love of her life – a love that still burns strong.

In this revised and updated edition of My Story, first published in 2006, Schapelle describes her descent into madness, and finding her way back, the chaos of her release, the trials of surviving outside on parole and, eventually, her dramatic return to Australia, all the while hounded mercilessly by the media.

This is the first time since 2006 that Schapelle has spoken, driven by a determination to show she has emerged, scarred, but with her dignity, humour and courage intact.

Written with bestselling author Kathryn Bonella, this is a deeply unsettling but utterly compelling tale of what should have been a holiday in paradise but instead turned into 13 years of living hell. You won’t be able to put it down.

Leonard Cohen: The Mystical Roots of Genius By: Harry…

I Love This Game: The Autobiography By: Patrice Evra, Andy…

I Embrace You with All My Revolutionary Fervor: Letters…

Shark Infested Waters: Tales Of An Actors’ Agent By:…