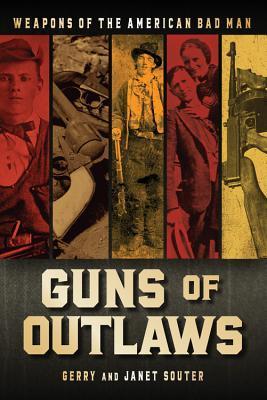 When gunslingers chose their weapons and took their chances.

From colonial-era rifles carried on the “Owlhoot Trail” to John Dillinger’s Colt pistols, the history of the American outlaw is told in guns–weapons that became each man’s personal signature. Authors Gerry and Janet Souter peer into these criminals’ choices of derringers, revolvers, shotguns, rifles, machine guns, and curious hybrids, giving us a glimpse into the minds behind the trigger fingers. With over 200 illustrations, Guns of Outlaws gives a unique look at the lives and the hardware of the most infamous outlaws in American history, and of the law enforcement officers who hunted them.

As settlers moved further west, away from authority and soft city life into the Great Plains, the push for survival through the endless prairies and jagged isolating mountain ranges bred ruthless men. Most outlaws were technology freaks who seized upon the latest weapon innovations developed in the industrious East to provide an edge in the life-and-death cosmosof the Wild West. Outlaws tinkered with their guns, creating unique hardware that became their calling cards. Attempts by lawmen to take control sparked a weapons race, pitting gunmen and bandit gangs against home-grown lawmen and vigilante “posses.” By the late 1930s and early 1940s, outlaws on horseback had given way to marauding bank robbers. Using fast cars and faster guns, they became folk heroes of the Great Depression, even as the law was hard on their tails.

The Wall Street Trilogy: A History By: Antony C Sutton