Book of Extremes: Why the 21st Century Isn’t Like the 20th Century By: Ted G Lewis 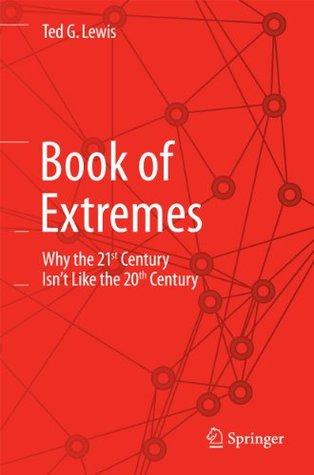 What makes the 21st century different from the 20th century? This century is the century of extremes — political, economic, social, and global black-swan events happening with increasing frequency and severity. Book of Extremes is a tour of the current reality as seen through the lens of complexity theory – the only theory capable of explaining why the Arab Spring happened and why it will happen again; why social networks in the virtual world behave like flashmobs in the physical world; why financial bubbles blow up in our faces and will grow and burst again; why the rich get richer and will continue to get richer regardless of governmental policies; why the future of economic wealth and national power lies in comparative advantage and global trade; why natural disasters will continue to get bigger and happen more frequently; and why the Internet – invented by the US — is headed for a global monopoly controlled by a non-US corporation. It is also about the extreme innovations and heroic innovators yet to be discovered and recognized over the next 100 years.Complexity theory combines the predictable with the unpredictable. It assumes a nonlinear world of long-tailed distributions instead of the classical linear world of normal distributions. In the complex 21st century, almost nothing is linear or normal. Instead, the world is highly connected, conditional, nonlinear, fractal, and punctuated. Life in the 21st century is a long-tailed random walk – Levy walks — through extreme events of unprecedented impact. It is an exciting time to be alive.

At Sixes and Sevens: How to Understand Numbers and Make…

The Works of Archimedes By: Archimedes, T L Heath

Pursuit of Zeta-3: The World’s Most Mysterious…

The Tornado Scientist: Seeing Inside Severe Storms By: Mary…

The Ultimate Guide to Knife Throwing: Master the Sport of Knife and Tomahawk…

Pacman Oct 28, 2021 0
The Ultimate Guide to Knife Throwing: Master the Sport of Knife and Tomahawk Throwing By: Bobby Branton |…
MP3

At Sixes and Sevens: How to Understand Numbers and Make Maths Easy By:…