After Euclid: The Geometric Imagination in the Long Scottish Enlightenment By: Matthew Wickman 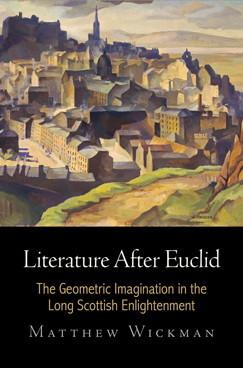 “Literature After Euclid will be a significant and controversial book, bringing together important issues in literary and intellectual history with powerful theoretical questions about the relation between aesthetic and scientific disciplines, the shape and constitution of literary history, and the conception of literary form. It is an original, accomplished, and frequently brilliant work.”—Ian Duncan, University of California, Berkeley

“Literature After Euclid poses fundamental questions about the relationship of space and time in eighteenth- and nineteenth-century thought, and offers an array of fertile, exciting insights.”—Alice Jenkins, University of Glasgow

What if historical fiction were understood as a disfiguring of calculus? Or poems enacting the formation and breakdown of community as expositions of irrational numbers? What if, in other words, literary texts possessed a kind of mathematical unconscious?

The persistence of the rhetoric of “two cultures,” one scientific, the other humanities-based, obscures the porous border and productive relationship that has long existed between literature and mathematics. In eighteenth-century Scottish universities, geometry in particular was considered one of the humanities; anchored in philosophy, it inculcated what we call critical thinking. But challenges to classical geometry within the realm of mathematics obligated Scottish geometers to become more creative in their defense of the traditional discipline; and when literary writers and philosophers incorporated these mathematical problems into their own work, the results were not only ingenious but in some cases pioneering.

Literature After Euclid tells the story of the creative adaptation of geometry in Scotland during and after the long eighteenth century. It argues that diverse attempts in literature and philosophy to explain or even emulate the geometric achievements of Isaac Newton and others resulted in innovations that modify our understanding of descriptive and bardic poetry, the aesthetics of the picturesque, and the historical novel. Matthew Wickman’s analyses of these innovations in the work of Walter Scott, Robert Burns, James Thomson, David Hume, Thomas Reid, and other literati change how we perceive the Scottish Enlightenment and the later, modernist ethos that purportedly relegated the “classical” Enlightenment to the dustbin of history. Indeed, the Scottish Enlightenment’s geometric imagination changes how we see literary history itself.

Matthew Wickman is Associate Professor of English at Brigham Young University and Founding Director of the BYU Humanities Center. He is author of The Ruins of Experience: Scotland’s “Romantick” Highlands and the Birth of the Modern Witness, also available from the University of Pennsylvania Press.

Download After Euclid: The Geometric Imagination in the Long Scottish Enlightenment By: Matthew Wickman ( Size: 3.63 MiB ) :

Colorization: One Hundred Years of Black Films in a White…

Hub-and-Spoke Cartels: Why They Form, How They Operate, and…

Liberalism in Dark Times: The Liberal Ethos in the Twentieth…

Heroics & Heartbreak: Twelve Months with the All Blacks…

Colorization: One Hundred Years of Black Films in a White World By:…