The Chief: The Life of William Randolph Hearst By: David Nasaw [Audiobook] 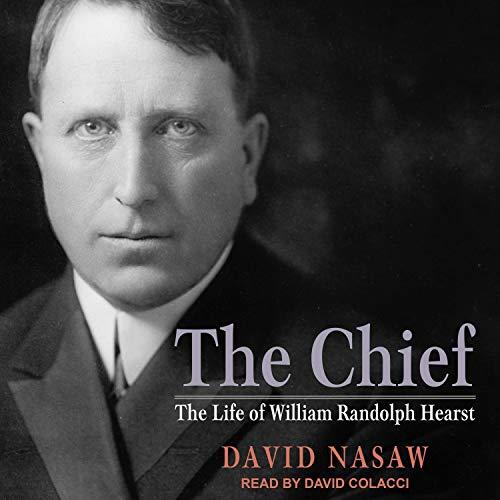 William Randolph Hearst, known to his staff as the “Chief”, was a brilliant business strategist and a man of prodigious appetites. By the 1930s, he controlled the largest publishing empire in the United States, including 28 newspapers, the Cosmopolitan Picture Studio, radio stations, and 13 magazines. He quickly learned how to use this media stronghold to achieve unprecedented political power.

The son of a gold miner, Hearst underwent a public metamorphosis from Harvard dropout to political kingmaker; from outspoken populist to opponent of the New Deal; and from citizen to congressman. In The Chief, David Nasaw presents an intimate portrait of the man famously characterized in the classic film Citizen Kane.

With unprecedented access to Hearst’s personal and business papers, Nasaw details Heart’s relationship with his wife, Millicent, and his romance with Marion Davies; his interactions with Hitler, Mussolini, Churchill, and every American president from Grover Cleveland to Franklin Roosevelt; and his acquaintance with movie giants such as Louis B. Mayer, Jack Warner, and Irving Thalberg. An “absorbing, sympathetic portrait of an American original,” The Chief sheds light on the private life of a very public man (Chicago Tribune).

Long Train Runnin’: Our Story of the Doobie Brothers…

The Bite in the Apple: A Memoir of My Life with Steve Jobs…

Christian Dior: The Man Who Made the World Look New By:…

No Escape: A Uyghur’s Story of Oppression, Genocide,…

Einstein: His Life and Universe By: Walter Isaacson…

I Too Had a Dream By: Kurien, Gouri Salvi [Audiobook]

Age of Cage: Four Decades of Hollywood Through One Singular…

I Didn’t Come Here to Make Friends: Confessions of a…

Spy Princess : The Life of Noor Inayat Khan By: Shrabani…

Long Train Runnin’: Our Story of the Doobie Brothers By: Pat…