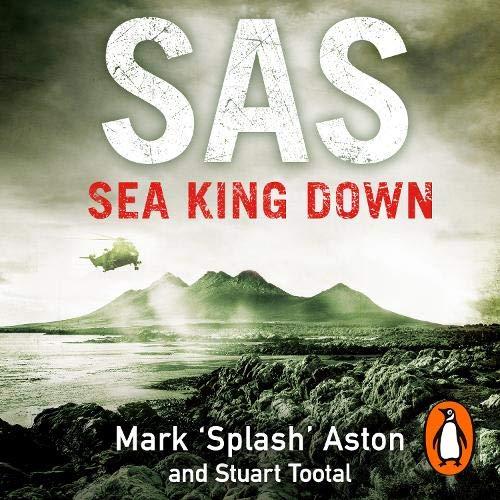 Brought to you by Penguin.

The thrilling, edge-of-your-seat true story of one soldier’s Special Forces operations in the Falklands War.

After passing the world’s toughest Special Forces selection to get into D Squadron, 22 SAS, in 1979, Mark ‘Splash’ Aston thought he’d missed out on all the action. Too late to fight with the SAS in a decade-long secret war in Oman, when terrorists then seized the Iranian Embassy in London in 1980 Splash missed out again when responsibility for the counter-terror role was passed to their comrades in B Squadron just weeks earlier.

Then on April 2nd 1982 Argentina invaded the Falkland Islands.

Days later D Squadron were on their way south as the cutting edge of Britain’s campaign to retake the islands. And over the next six weeks of fighting, as one extraordinary episode followed another, the action never let up.

From the 100 mph winds and minus 25 degree temperatures atop South Georgia’s Fortuna Glacier to a foxhole on West Falkland operating under the noses of the enemy, Splash and the men of D Squadron fought in contact after contact. And in doing so they burnished the legend of the SAS with the astonishing assault on the Argentine airfield on Pebble Island that decimated the enemy’s ground attack capability and, in the dead of night, prevailed in their vicious close quarter battle with Argentine Special Forces defending Mount Kent.

But it was an event that was out of their control that came close to defining D Squadron’s war: the night their Sea King helicopter crashed into the South Atlantic with 31 people on board. Splash was one of just seven survivors of a tragedy that caused the heaviest loss of life to the Regiment since World War II. Evacuated to a hospital ship to recover from his injuries, he defied orders and a suspected broken neck to escape back to his unit and rejoin the fight until it was won.

This is the remarkable story of Splash’s war, but it feels like a thriller. An unstoppable, edge-of-the-seat insight into still classified Special Forces operations during the Falklands War, SAS: Sea King Down will take its place alongside classics like Bravo Two Zero as military adventure writing of the highest order.

Antonio Gramsci: Life of a Revolutionary By: Tom Nairn,…

Holiday SOS: The Life-Saving Adventures of a Travelling…

Stronger: Courage, Hope, and Humor in My Life with John…

Herb Gardening for Beginners: A Simple Guide to Growing and Using…

A Handful of Summers By: Gordon Forbes